This country has confirmed to me personally, and to the world, that it always can get worse..I am out of words.

I never thought meaning of happiness would change for me…That I would be happy to hear a boat was saved from sinking, without thinking about why people have made this trip in the first place, or how they were after they survived, cold, freezing, traumatised. Just happy cause they are alive.

I never thought that I would be happy after getting money into a besieged city, where people can barely find grass to eat. Nor that I would feel happy knowing that airstrikes had only damaged buildings this day, regardless of whether it will damage people the day after or not.

Never knew that I would feel happy to show artworks drawn by children living in the worst situation, and feel happy to be able to sell their amazing artworks to people so I can send them the money back.

Never thought that I would leave the world’s most beautiful and dangerous city – Aleppo – on 29th of Feb 2014, not knowing when and if I ever will return..

Sometimes I think that it was a harsh lesson for me to learn, as happiness meant something different to me before, without caring about world’s problems..

Happiness for me then was having a nice meal, a good night out, buying new stuff…and now it’s all different, and never will be same again.

Everything changes for a reason. But my reasons for feeling happy have changed, and I don’t think they will change again as long as there is misery in this world.

This picture, drawn by 13 years old Douha Al-Khalil who is living in a refugee camp in lebanon, represent me and most of the Syrians. The caption says:

“I swear to god i hate my Exile” 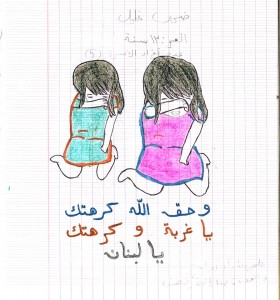